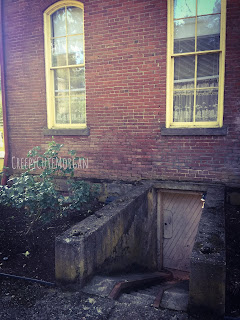 Exterior Entrance to the Basement

Boredom beats fear. At least for me it did.

After sitting still for ages, I explored the basement. I opened the forgotten boxes, their outsides caked with decades-old dust and grime. I read every document; poured over every handwritten letter.

Here's what I learned:

Fred Boone was a groundskeeper back when it was an orphanage/school. The building had served its purpose as a hospital, and was repurposed sometime in the late 1880’s. Boone had a green thumb and was particularly good at growing flowers. I found a few pictures of him where he looked pretty happy, creating bouquets for the nuns. At some point, Fred was “promoted” by the nuns. There was a letter from a Sister Agatha that said he was to head the Back House for the children that needed extra care. They thought he’d be good at it because he had such a delicate hand with the flowers. Later, the Back House was known as Fred’s House.

There wasn’t proof of destruction, just a statement that it was done. I searched fruitlessly for pictures to confirm that Fred was gone, but there weren’t any. After 1935, the man Fred and the house Fred ceased to exist.

That couldn’t be right. Of course, there was a coverup, I thought. I absolutely saw Fred! Even then, in the complete darkness of the basement I could see the crumbling bricks- the red chalkiness fading to white where the moss had eaten it away. I saw the windows in their warped frames; the broken and jagged glass protruding threateningly.

Frustrated and tired, I had given up the search and was starting to move furniture from the wall in hopes of finding another exit, when I knocked over a rickety armoire. One of the feet had rotted and when I shoved it, the whole thing collapsed on itself. I thought someone would finally hear me, but I was wrong- the walls were too thick, too impenetrable.

In the armoire, amongst mice droppings and spider eggs, was a pack of letters sealed together in a flaking leather folder. They looked like legal documents.

What I found were letters written by Fred Boone. He said he loved the orphanage, the kids, and the nuns. He loved the cinnamon rolls that were baked ever Saturday afternoon and the games that were played in the lawn every Tuesday evening. He loved the flowers. He loved his life.

That was, until Sister Margaret became head nun. She believed that kindness was weakness and that children needed a firm hand. Curfews were put in place and new rules were posted. Punishments were doled out for rule breakers.

In order for Fred to stay, he would have to become a disciplinarian. Fred struggled with this, but eventually gave in. The school was his home. He put his energy into beautifying the Back House. He put up wallpaper in all the rooms and hung flower boxes outside each window. 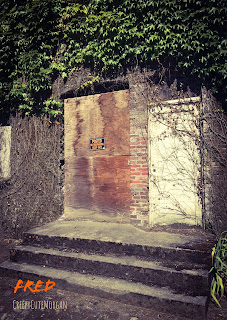 Fred’s handwriting became shaky as he wrote about his new duties, things he described as “tortures.” He was forced to withhold meals as punishments, keep children indoors for weeks on end, and give lashings. He described an episode which I can’t bring myself to relay here- a story about a little girl that stole a teddy bear and was punished strangely and severely. I won’t place those images in your imagination.

Fred grew to hate his duties and Sister Margaret. One evening, he’d had enough. Sister Margaret came to Fred’s House to give orders and Fred lost it. He said what happened next, was the biggest regret of his life. In a moment of rage, he smashed a table that held a small prayer candle. The candle ignited the curtains in the kitchen and set the house ablaze. Fred did his best to save the children, but more than half were lost. Fred lamented that his legacy- the home he built was never meant for love or for comfort. His house was meant for harm; for penance and suffering. He’d allowed terror and brought anguish.

There was a note included at the end of Fred’s letters that stated that Fred was laid to rest shortly after turning in his resignation. He’d hung himself in the kitchen of Fred’s House.

I understood the woman now, what she had said about Fred being a beautiful prison. She’d meant that Fred had become the house. He’d become his own prison.

“Is anyone down here?” The voice echoed off the walls, as if on cue.

The night guard was the one to let me out. He said he heard me moving boxes in the archive and then he heard a slam and figured I got locked in. He had no idea I’d been there all day.

I confirmed his story. What was I going to say? That I hadn't been in the archive all day and couldn't possibly have made any noise? That's crazy talk . . .

As crazy as it might sound, I know I was let out because I found what I was meant to find- the leather folder with Fred’s last words. I left it, along with the perfectly pristine gloves on the open photo album in archive.

The night guard let me out and I walked straight over the brick path to the rocky pot hole filled black top to the Back House- to Fred. 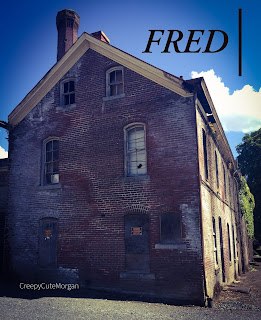 Fred didn’t answer me of course. He’s a house. Houses don’t talk. They creak and bend; they sigh and shift; but they don’t talk.

Fred didn’t need to talk anyway. His words were not longer hidden away in a creepy basement.

It wasn’t long before Fred’s story hit the newspapers. Historians were all atwitter about the discovery of the history of Fred’s House.

Everyone in town could see Fred now.

Is it possible that I wasn’t the only one that could see Fred before the story broke? Yes, I suppose. In my anxious rush, I never actually asked anyone about the building. I like to think, crazy as it may sound, that for one day Fred was my secret. It may be true, who knows?

I've spent nights wondering . . . why me? Why did Fred choose me to share his story with? Was it because I loved to wander the old neighborhood? Or that I'm inexplicably drawn to old things? Why did Fred trust me to share his story? Maybe he knew I'd understand- that I wouldn't judge him for the actions to was forced to carry out. Deep down, I have a feeling I may have made the same choice- the choice to keep my home, to stay with the people I loved- to try and protect them. Fred didn't mean to become a monster; he was gradually turned into one. It would have been so easy to fall into that trap, nudged here and there, pushed between right and wrong so often that the world becomes gray. I understand Fred, because we're alike. I couldn't have walked away from the school. Fred must have known- must have sensed it . . .

What happened to Fred?

Fred is a protected monument now. I don’t think the general population thinks he’s haunted, but I know differently. Sometimes on my lunch breaks I go visit Fred. I sit on the uneven concrete sipping coffee and listening to the old structure sway in the breeze. I feel connected to Fred in a way I can't explain. Since his story came out, the whole feeling of the building has shifted. What once was horrible and broken, is now worn and warm. The roof is still covered in moss and foundation is still cracked, but the feeling of fear surrounding Fred is gone. I feel comforted sitting there, as if I'm sitting with a long lost friend. I swear sometimes I can hear the giggle of children or the patter of excited feet. I like to think that Fred’s at peace along with the children who perished in his home- that maybe, just maybe, Fred and the kids are finally happy.

P.S. I got fired from the Kickstarter job. I told Kyle that I'd had a "family emergency" and he was understanding, but it didn't matter. Kyle was broke. George pulled the plug on financing that morning we were in the office together. Kyle bought a blimp with the company logo on it and George found out. George was going to fire me after lunch, but I never came back. He was offering me a pity coffee that day. I got a new job pretty quickly though, at Bad Carl's. I'll have to tell you about it, and the girl I met there who swore graves were jumping out of the ground in the cemetery.

I'm starting to think my city isn't as dull as I originally thought.