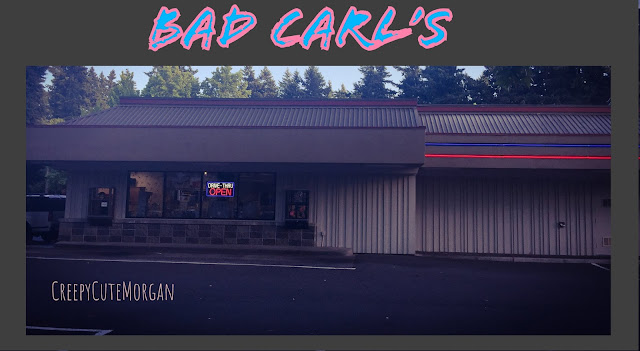 The little ol' town of Orange Grove Springs isn't a particularly interesting place. It's a small city like thousands of other cities, filled with the same kinds of people and the same stories. The people go to work, they raise their kids, they get fat in front of the television. Everyone follows the clock; living for football games on the weekend and game nights in basements. At least, that's what I thought until 6 months ago when I discovered an abandoned building, a ghost, and a buried story.

I'm talking about my friend Fred. If you haven't met Fred, you should go back a bit further in my blog. He's a building . . . a person . . . he was a person. It's complicated. Long story short: I'm friends with an old crumbling building that was once used to punish children, but is now a safe haven for their spirits. So, yeah, Orange Grove Springs isn't as vanilla as I originally thought.

A little history on Orange Grove Springs:
1. There are no orange groves- not a single orange tree.
2. There are no hot springs- the nearest ones are 20 miles away.

I live in Washington state; in vampire country. Not really, but I do live just a few hours away from Forks, a place any good vampire fan knows well. 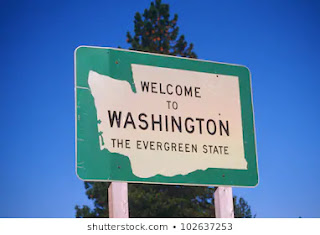 The name of Orange Grove Springs used to be Clancyville- named for a racist, sexist, immoral, old white guy that made his capital off bordellos. Every indication of Mr. Clancy has been wiped from the storefronts and visitors guides with the exception of Clancy Hospital. The name on that one won't likely change any time soon. Mr. Clancy's great great great great granddaughter Suzette heads it and she's a real witch. At least that's what I'm told. Word is, Suzette Clancy should be avoided at all costs. I've been lucky enough not to have ever needed to visit the hospital.

Why was the town renamed Orange Grove Springs? It was a city vote. When I moved here 2 years ago, I asked around. I had to know why a town that couldn't possibly have an orange grove was named for one. Orange trees need a tropical environment to grow. The Pacific Northwest is cold, rainy, and rarely sunny. In reply, the locals shrugged. Some said, "it was the 1960's a lot of weird stuff was going on." Others said that the townspeople wanted a sunnier name to try and invite more sunny days. And the nonexistent hot springs? There's a theory that there used to be hot springs here. All the mountains in Washington are active volcanoes, so it's possible. The name of the town is a mystery no one seems overly concerned about. I guess it doesn't matter as no one calls Orange Grove Springs by its proper name anyway. For miles, Orange Grove Springs is known as "Springs" or simply OGS.

Whatever you call it, OGS is home. It's a bit dark and a bit dreary. It rains here half the time, but that keeps the foliage lush and green. There's also a perpetual damp smell that takes some getting used to- like clothing left in the washer too long

Speaking of getting used to, I've gotten the hang of my new job as a waitress at Bad Carl's. After getting fired during my Fred adventure, I had to get a new job fast, and Bad Carl's is always hiring.

Have you heard of those fast food restaurants that advertise their food as "heart-attack worthy" or "killer"- to elude to the fact that the food is terrible for you, but oh-so-delicious? That was the premise for Bad Carl's except Carl didn't have a clue how to advertise. The slogan for the greasy hole in the wall is "Terrible food for the whole family!" Bad Carl's is beloved in OGS. It turned out that terrible advertising can sometimes be the best advertising. Since it opened its doors in 1990, the restaurant has been a hit. The food constantly changes based on whatever is in fashion in the junk food world. Right now, it's deep fried donut burgers and extreme pizzas. 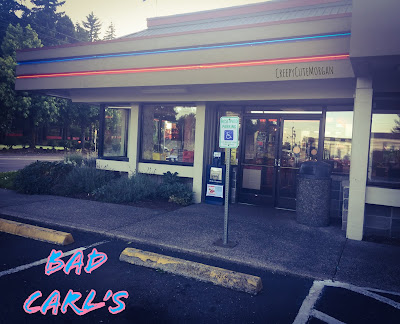 I have a new story to share . . . something that's still unraveling as I write. I can barely believe it's happening, even with my Fred experience. Reader beware, I have no idea where this story will take me . . .

Last night I was working at Bad Carl's. I was mid-scrub on a table that had ordered the 666-spicy-mac-and-cheese pizza when Melinda, the other waitress on the evening shift at Bad Carl's, came bounding in an hour late covered in dirt. It was just after 8pm, and already full dark. She was pale and her eyes were huge.

I started at her, congealed cheese hardening under my fingernails. "Whoa. You okay, Mel?" I asked, taking in the mud streaked on her green plaid dress. She was covered, as if she'd dove down a slip-and-slide hands first. Even her purple wig had dirt in it.

"Morgan, the cemetery, I was driving and then all of a sudden it just came out of nowhere." Melinda said, looking at me with her huge unblinking eyes.

"What came out of nowhere? Did you hit something?" I asked.