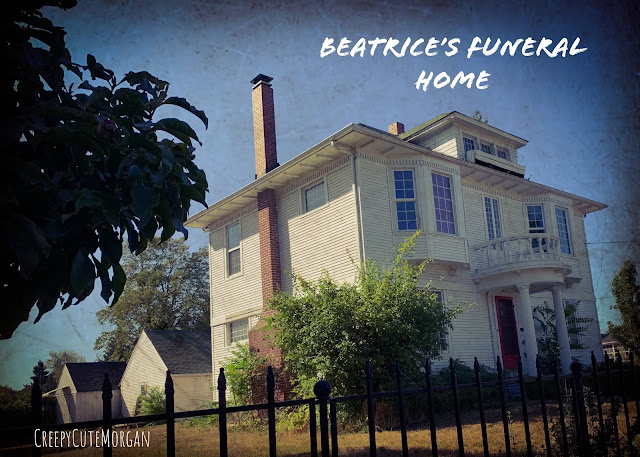 As my hand hit the child-sized casket, I was transported back to the day I got locked in the basement of the old school. The smell of rotting mushrooms faded and was replaced with a pungent black tea smell- a familiar woodsy odor that stirred instead me. I heard a woman’s voice telling me about Fred . . . the woman that stood outside the old school looking whole and human and alive the day I went to investigate Fred . . . the woman that wasn’t really there. She was the first ghost I'd ever seen and I’d nearly forgotten about her.

“What just happened?’ Melinda’s voice echoed. She sounded far away.

“They’re gone. The mushrooms are gone.” Kyle said. I could barely hear him.

My hand was on my knee, feeling the itchy purple carpet beneath me. The mushrooms and their sticky juice were gone without a trace. My black tights were clean.

“Do you smell tea?” I asked, my hand still planted on the casket. It wasn’t floating anymore. It stood perfectly still, on a small table covered in a soft blue tablecloth- the color of a child’s onesie

“I’m holding wine, dumbass.” Melinda quipped. I heard her take a deep drag of the liquid.

“Did you see anything?” Kyle asked. He stood behind me, his hand on my elbow, helping me to my feet. Melinda handed him the wine and he took a huge swig. Melinda looked over at him impressed.

“I saw a ghost. One I’d forgotten about. It was an old lady outside the old school that Fred sits behind. She’s the one that told me about Fred.”

Kyle handed me the bottle and I took a huge swig too. BLECH. I spit it out. “It tastes like tea. Bitter tea.” Good thing the carpet was dark. It soaked up my spit nicely.

We stiffened, and turned toward the tiny casket as one.

The casket was floating again, just barely. Melinda, Kyle, and I stood shoulder to shoulder, our eyes fixed on the hovering wood.

“May I have that?” The disembodied voice asked politely.

I took a small step forward, extended my arm as far as I could, and set the decanter on the table next to the floating coffin. The single light bulb above us brightened and then mellowed, giving off barely any glow.

“Lovely, just lovely.” The voice said. The decanter floated and tipped, pouring dark red liquid on the casket before standing upright again. “Oh dear, none for me.” The voice giggled creepily.

“Enough of that.” The light bulb went back to full brightness and the casket landed with a soft thud on the tablecloth. The stream of dark red wine pooled at the corner of the casket and dribbled onto the soft blue cloth beneath it.

“I have a message.” The voice continued. “The witch is in danger.”

The curtain behind us swished open with a flourish. 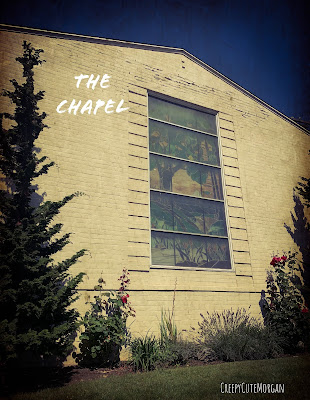 “What are you kids doing in here?” An old man yelled; his voice way too loud. He’d been crying and held a soiled hankie under his nose.

“Is that Althea’s niece?” An old lady asked with interest, butting in behind the old man. She looked the gossiping type. She was far too interested in what was going on. Her eyes darted around the small display room greedily.

I took a step to the side and back, shielding their view of the child-sized casket and the red wine pooled beside it.

“Not the best time to be sneaking into the closet.” The old lady said winking, “though I’m sure getting to know one another in this place must be a quite the thrill,” she said, not bothering to whisper.

“It’s time to visit dear Althea” Suzette Clancy said, stepping into view. “That is, if you’re not too busy.” She said, dabbing fresh tissues beneath her dry eyes.

We shuffled out of the room. Kyle was quick to pull the light switch before we were all out- masking the mess from the mourners.

I didn’t see Melinda’s face as we left the room, but I could feel her fear. Kyle stood beside her, walking down the hall silently, their dark heads bobbing in the crowd. Concern radiated off him in waves. He was worried about Melinda, really worried.

We filed wordlessly into the chapel and were lined up into a single file line and lead toward the coffin. The room was silent but for the occasional sniffle and shuffling of feet. All heads were bowed in prayer or contemplation.

All too soon, it was my turn. I walked along the carpet, my flats moving noiselessly. Large metal stands held wreaths and bouquets. Lit white candles lined the floor. On a table, covered in deep purple satin stood a white casket, the upper portion lid propped open. I stepped forward and peered inside.

Althea lay there, eyes closed and arms crossed, looking peaceful and perfect. Her gray hair was in a neat bun and her cheek bones were rouged. In her hands she held a rosary and a white porcelain dove.
I walked on, taking a seat in the chapel next to Kyle. Both he and Melinda were staring at a giant framed photo at the head of the chapel.

In the photo was a young girl, obviously a much younger Althea. She smiled brightly, holding a protest sign in her hands. Scrawled in dark writing were the words, “DEATH TO WITCHES.”