The Tale of Fred: Part 2- The Woman Who Wasn't There 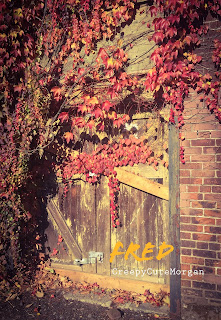 Thinking about something over and over again doesn’t make the memory clearer- it muddies it. It’s like playing an old VHS tape again and again, corroding the picture, causing holes and spots to appear that were never there before.

Sitting in my room at 3am, I couldn’t make the black flash I saw in the building come into focus. The more I thought about it, the more confused I felt. Was the flash of black a bird? A bat? Surely, I’d been freaked out by an overgrown rat or something. I sighed. Did it matter what the black flash was? Probably not. The real question was, why the hell was there an abandoned building in a perfectly restored neighborhood? And why didn’t I see it for so long?

My wife slumbered next to me, unaware of what I’d seen or experienced, oblivious to my fears and the fact that I was up most of the night, thinking crazy thoughts.

I walked to work the next day- to the perfect building, that didn’t look quite so perfect anymore. The paint looked faded in places. My office wasn’t my own that day. George was there. He sat at the small desk in the corner, facing the wall. George was the father of the owner of the company and the financer. He was in his 60’s and greying. He’d come in from time to time to “look at the books.” Which really meant he’d come in to see what his son had done with his most recent contributions. Kyle, my boss and George’s son, had some radical ideas about shoelace sales that his dad didn’t agree with. I guess I should have mentioned earlier, I worked for a Kickstarter for recycled shoelaces. It was a short-lived job.

George didn’t bother to look up when I entered the room. He barely ever acknowledged me. I threw up the blinds to my window and started up the computer. I stared out the window. There it was, peeping out from the corner of the converted school. The abandoned building stood where I left it, looking larger than the day before- but that wasn’t possible. Knowing it was there was just making it look bigger than it was. It was in my head, surely. Even from this distance I could make out the crumbling brick and the slanted roof, the autumn leaves making it look like it was on fire.

I was a terrible employee that morning. I couldn’t focus. Every little move out my window made me edgy- the revolving bank sign, the pedestrians on the street, the curtain in the funeral home’s window swaying in a non-existent breeze.

“Coffee?” George said around noon. I jumped out of my chair. I’d forgotten he was there.

I’d given a reply that I didn’t need coffee. If George noticed my jump, he didn’t say anything. I left without another word, headed down the staircase onto the smooth sidewalks among the lawyers and realtors. Could they see the abandoned building a few blocks away?

I took off at a run, my anxiety getting the best of me. I’d waited what seemed like an eternity to get back to the building. If not for the wrought iron fence, I would have driven over at 3am. The former school and the surrounding lot were locked at night, for what reason I couldn’t say. I crossed the meticulously manicured yard of the former school, dodging a flower bed filled with orange blossoms. A group of old ladies were gathered near the entrance, sipping cups of tea from tiny porcelain cups. 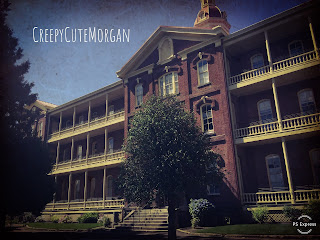 A woman stood at the edge of the lawn, somewhat removed from the group of ladies, though she was obviously with them. She watched the group of chatting women intently, swirling her tea. Just as I was passing behind her, she grabbed my wrist.

I yelped, but she shushed me. She pulled me close; so close that our heads were almost touching. I protested, pulled away, but she griped harder.

“Shhhhhhhh . . .” she whispered. “I know why you’re here,” she said in my ear, so quiet I could barely hear her, “you found him. Beautiful, isn’t he?” She held out a hand to keep me from replying, “he was terrible, you know, but it wasn’t his fault.” She looked at me, her dark eyes too big her for wrinkled face, “It was a prison, you know. Poor Fred.”

“Fred?” I asked, but she was gone, and in my hand I held a cup of tea, black as the night sky.