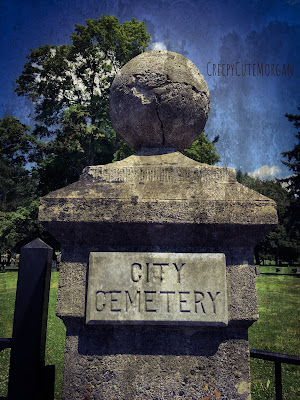 Melinda started to cry, which shocked me most of all. In the few months I had known her, she barely emoted. She was a stoic rock, painted with black eyeliner and covered in lace.

I dropped my sponge and pulled her into a hug, fully aware that I would get mud caked all over my Bad Carl’s neon tank and mini skirt.

Caring, you may say, is my fatal flaw. My wife, Emma, says that my heart is too big for my body. It doesn’t help that I’m an Empath and can literally feel everyone’s emotions. I’m a sponge. I hurt with every tear- feeling them fall as if they are my own. Emma says that’s why I got tangled up with Fred. I just couldn’t walk away from someone who was hurting so badly. I’m lucky to have Emma. She believes my Fred story and she believes in me- despite the fact that I’m a 23-year-old struggling photographer who hawks “deadly good” burgers for a living.

“Breathe, Mel. Just breathe,” I said, patting her back.

“Since we’re not busy, I think I may head out to work on my business proposal.” Kyle announced, exiting the kitchen. “There’s a concert in Seattle that appears to have taken our customers.”

You may remember Kyle. He was my boss at the Kickstarter job. After he bought a blimp with his dad’s money, he’d been cut off. He was forced to work at Bad Carl’s to appease his dad. Kyle started about a week after I did, taking over evening fryer duty.

“Is that okay with you?” Kyle asked, wiping his glasses on the corner of his shirt, oblivious to his surroundings.

“Melinda is crying,” Kyle said in a detached factual way as if he was describing a spreadsheet full or figures. Though well meaning, Kyle tends to lack empathy and the most basic of social skills. I imagine him as a robot in a human’s body, who hasn’t quite learned how to pass for human.

“You think, dip shit?” Melinda said, spinning on her heels to hit Kyle with a death glare.

Kyle stuttered, and then tried and failed to place his glasses back on his face.

“Mel, what happened?” I asked again. 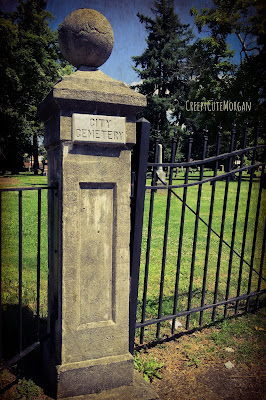 “I was driving past the old cemetery like always . . .” Melinda said, making me recall a memory from last week . . .

Melinda had joked during a busy Friday night shift that tombstones seemed to be moving in the cemetery. She’d said that they’d move from corner to corner, rearranging themselves every few days. Sometimes she’d see one pop out of the ground and fall over. I’d asked if she’d been smoking pot. Even with my Fred experience, I was still looking for a logical explanation. OGS couldn’t be that freaky. She’d said she smoked, but not that much.

“I slowed down to see if anything had changed . . .” Mel continued looking at me for reassurance. I nodded and she continued, “there was this tombstone, it had cracked down the middle the day before, but was glued back together. I pulled over to get a better look. The ground was wet, like it had just down poured.” She said, sucking in her breath. Kyle and I exchanged a quick glance. It hadn’t rained in 4 days. Everyone in OGS had been acting like we’d been transported to California. I’d seen more booty shorts than I could count.

“I got out of the car and slipped in a puddle. When I hit the ground, the tombstone shook. It was moving fast, trying to free itself from the ground. The noise . . .  oh, god the noise . . . it was groaning, like a person in pain. It scared the shit out of me. I got back in my car and hit the gas. Everything was fine, until I rounded the last corner in the road toward the end of the cemetery. The tombstone was there! It was there, Morgan! I swerved into the left lane to get away but it jumped out of the ground in front of the car and I hit it. I ran over it and broke it.”

Melinda grabbed my elbow and pulled me forward toward the front door of Bad Carl’s. Kyle followed silently; his features set in disbelief. Melinda’s jeep sat under a street lamp, facing the street. She pulled me hard and we sprinted across the dark lot, Kyle in tow.

“There is no damage,” Kyle replied scientifically, putting his glasses back on.

“No! I am NOT crazy. It happened. There’s crazy shit going on here.” Melinda said, and I believed her. She was too scared to be lying. Besides, why would she lie about this?

Kyle climbed into the back of the Jeep. “What are you doing?” I asked.

“We must investigate,” He said, his dark eyes lighting up. 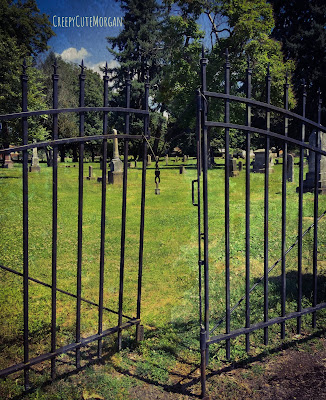 “Right! I’ll show you!” Mel replied excitedly, literally pushing me into the passenger seat. Looking over my shoulder, I could see Jake, the grill guy, playing on his cell and stuffing a unicorn donut in his face. There weren’t any more customers. Kyle was right, everyone had gone to see Aerosmith in Seattle.

I texted Jake:
Mel’s had an emergency. Had to go. Kyle too. Sorry. Keep my tips.

Jake looked up and scanned the restaurant and then replied Kewl, before going back to whatever game he was playing on his phone. Jake’s by far the most laid-back person I know. I could have texted that Melinda had lost a leg and his reply would have been the same.

Burnt rubber filled my nostrils as Melinda peeled forward onto the highway to the cemetery. She climbed to 70 within seconds. What should have taken 20 minutes, took us 5.

“Here!” Melinda yelled as the car jolted to a stop. She leapt out of the Jeep and sprinted down the road. “No! Where is it?!” she screamed at the empty stretch of highway.

A grinding noise greeted me as I opened the car door. I turned slowly in my seat just in time to catch the last few chunks of rock flying through the sky. “Mel . . .” I whispered.

“Melinda, I believe your tombstone is over there,” Kyle called from behind me. Melinda turned, her frame illuminated by the orange glow of the Jeep's headlights, her hands covering her mouth in horror.

I stumbled out of the car along with Kyle. We stood, shoulders touching, watching centuries old rock wind and dance in the darkness amongst overgrown grass, creaking and screeching with the effort of putting itself back together.