The Tale of Fred: Part 3- Locked in the Basement 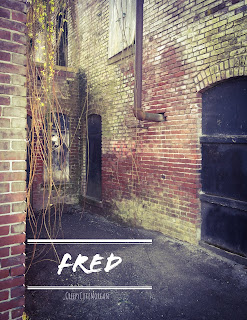 The woman disappeared, leaving her teacup in my hands. I looked from side to side, expecting to see a lady jogging across the lawn, but she wasn't there. The group of ladies nearby chatted, unmoved by my disorientation. They hadn't seen the woman leave, maybe they never saw her at all . . .

My heels clicked along brick and then on wood that cried out with every step as I entered the former school. I swear it said, “leave, leave, leave . . .” 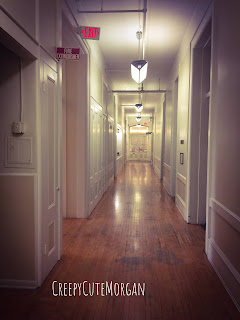 Inside the Former School

The old ladies talked about triumphs of old and about the work of the great nuns. I stood, wide eyed, my arm tingling where the woman had squeezed it. I looked down at my arm, at a bruise that was forming; a bruise that looked like fingers. The woman was gone, though I had proof that she’d been there- purple blotches forming under my skin to confirm she was real. Was real. At one point she had been real . . . had been there . . . And she knew about the building, the building called Fred.

As the shock wore off, I realized she must have been a ghost. I know it’s crazy, but how else could a woman disappear like that? I read somewhere, probably on the internet, that ghosts can leave marks- injuries on the living. I was marked by a ghost . . .

“The archives are here.” A woman said, pointing to a room just inside the main hall of the converted school.

The woman's voice snapped me back to attention. As we filed past the archives room, I saw through the cracked door that no one was inside. I had to go in. I had an opportunity to learn more about Fred; a chance to figure out what happened. I'm not proud of it, but I pretended I had to pee, and when the ladies had filed into one of the offices, I snuck in.

Boxes were piled up against the walls, labeled neatly with the decades, scrawled in cursive- the kind they stopped teaching in schools a long time ago. The oldest boxes were set neatly on a metal table in the middle of the room. Cloth gloves sat next to an old photo album on the table. I looked over my shoulder and put my ear to the door to check the coast was clear.

I put on the gloves and opened a photo album marked 1857.

Inside were black and white pictures of children in centuries-old clothing, wearing caps and linen trousers too big for their tiny frames. The girls wore boxy dresses that looked like they’d been made out of old bedspreads. There were group photos clumped by age. No one smiled. Most of the photos were taken in front of the school, but a few were taken around the back where flowers used to grow.

I kept flipping, until a smaller brick building caught my eye. Fred. It (or should I say, He?) was in the back of a photo of smiling nuns, offset to the right. Someone had tried to scratch it out of the photo, but the pencil they’d used had mostly eroded. I lifted the picture, hoping to find a note scrawled on the back. Out fell an even older photo of Fred from when he was newly built. It was charming, with small simple windows and a tidy exterior. A man stood nervously by the front door, his lips pressed into a thin line. A few nuns stood next to him, looking solemn. 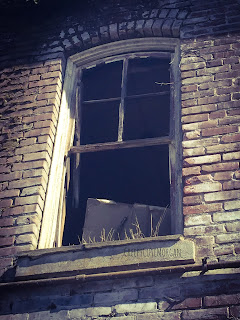 I don’t remember what I heard in the hall, but I had been staring at the picture when something just outside the door caught my attention. Panicked, I pocketed the photo and ran for the back of the room, diving behind the largest pile of boxes. I stomped on a part of the floor that sounded resonant and hollow, and to my surprise there was a trapdoor there to the basement to what I guessed was the storage room for additional boxes.

I slipped into the basement right before the door clicked open and a custodian came in to vacuum. The trapdoor clicked and latched shut the second it closed. Realizing my error a second too late, I yelled, but he couldn’t hear me through the thickness of the century-old floor.

He left and I was trapped.

The worst part of being in the basement (aside from the embarrassment) was the fact that there was no cell signal. I used the light from phone to look around and as I had suspected, I was in a storage room.

There were boxes, but that’s not what caught my attention. I was surrounded by old, creepy furniture. It was a horror movie come to life. Old rusted gurneys lined the walls along with old wooden wheelchairs that creaked though no one was sitting in them. Medical implements lay scattered on bedside tables. The worst, though, by far were the perfectly made up child sized beds. They were too white; too crisp for something in a basement. I touched one of them with my still gloved hand, and my hand came up covered in snow white dust.

I tried to take photos, but my photos of the basement all came out black. Literally nothing could be photographed.

I slumped against a wall and looked at the photo I’d pocketed. On the back was scrawled “Fred Boone, head of the Back House. For the children who won’t behave. 1891.”

Stay tuned for the epic conclusion!